Part 1 – If Only Becomes How Soon?

If you don’t want to read this long intro, go ahead and skip to Part 2.A little over a year ago my pastor and I had a series of conversations about making improvements to the church sound system. You know the wishful dreaming I’m talking about, “if only.”

Like installing an In-Ear monitor system, a digital interface and computer, using pro-tools to live mix the FOH and essentially turning the sanctuary into a studio and treating the sound like that. At the time our entire monitor system consisted of three Wedges (The worst monitor solution ever), and some guitar amps.

Those conversations grew into actual plans that lead to siginificant imporovements to the sound of our church and the media team. Once Pastor Phil felt released into this from the Holy Spirit we took our first steps.

I am a fourth generation Pastor’s Kid (on both side), with most of those generations affiliated with The Assemblies of God. Up until I was 12 my dad was an associate pastor at a few larger churches with actual budgets, and I was in now way involved in ministry or working at those churches. Then in 2001 my dad became the Senior Pastor at Phoenix Calvary Temple, a small church located almost smack dab in the middle of Phoenix Arizona.

As we continued to serve in ministry there, I grew into a decent drummer and guitar player, playing every sunday. I also became interested in technology and recording (Although I wouldn’t blossom in this area until college and I had my own laptop). My dad would often come to me with a project that he needed done but had no idea how to do, and ask if I could figure it out. This was actually how I got into video editing.

Our district was perfoming a fundraiser for our Youth Campground and my dad wanted to show a video to go with our love offering so the congregation would know what they were giving to.

He had shot some video of the campground and gave me the files. I got to work using Windows Movie Maker (I know right?) and figuring out how to splice up video, and choosing the perfect song (You know those gifts that God sometimes gives us that we can just instinctively do? This is one of mine). The video was a success and I was hooked! I even ALMOST went to school to get a film degree. I didn’t, more on that here.Throught college I learned a ton about audio engineering playing in a band and being the only one who knew how to record. In addition I worked for our on campus small event production company and learned so much about live events and where to get gear.

Fast forward to 2012 when I started attending Hope Christian Church and started producing videos for our Easter and Christmas services and playing lead guitar on the worship team, which was a growing experience in itself (I’m more of a rhythm guitarist).

Pastor Phil (Our Pastor) is an audio engineering beast! He’s a Hip-Hop Artist and Producer, performing under the name “The Voice.” He’s also a PK, like me only really serving in smaller churches.

While we were talking I mentioned something that I had seen my dad do at his church in Carlsbad for In-Ear Monitors. That was when Pastor Phil changed the converstaion from “If Only” to “How Soon?” How soon can we order the necessary equipment and install it?

Ok, so to purchase and install a professional, specifically designed In-Ear Monitor system for a band consiting of 5-8 members (with plans to expand) was way out of our budge range.

Pastor Phil said I had about $300 to play with. With this kind of a budget I knew a few things.

So to start with, we had a Carvin 24 channel mixer that was being used in the youth room that was way more than they needed. We also had a small 8 channel portable self contained unit that we installed up there instead to free that up.

Please note, this is the most integral part of this set up and may be where I lose you. However, I do know that almost every church I’ve served in has and old board laying around

So I had a good board. Now how to use that to power the In-Ear Monitors. Well, I used a modified version of a technique I had seen at Spirit West Coast.

See they used two boards for the concerts, one for the FOH and another for mixing the monitors. So we did just that.

I placed the board on the stage in a back corner out of the way and then proceeded to wire it up.

How did I wire it?

Well the signal path is as such, well take my electric guitar as an example:

I play through a digital processor so I don’t need an amp, I can go directly into the mixer, also all our our musicians go direct. I highly recommend moving to that kind of a set up. Reducing the stage volume like that in a smaller space with greatly improve the clarity of the sound.

So out of my guitar I go into a DI box. The DI box has two ouputs. One is an XLR (microphone) and the other is a TS (guitar) connection. The XLR goes into the snake to the FOH board and the TS cable goes into a channel on the Carvin monitor board.

You do this for every instrument. For the mics, I had been given years back an XLR splitter, with like 6 channels. You hook the vocalists mics into that and then send one out to the FOH and the other to the Monitor Mixer. Then we used the 4 auxiliary sends on the Carvin board as 4 different mixes.

Well, we didn’t have enough DI boxes or cables so we needed to order them and a few pieces of equipment to get the headphones to work.

Here’s what we needed:

So many of you know that cables and headphones can get expensive, but I know a secret!

That secret is Monoprice.com  It’s a great place to get cables and many accesories for a fraction of what you pay at places like Guitar Center and Musicians friend. I learned about it at my afforementioned Media Production job. We were able to get most of the gear for much less than my Pastor would have thought.

For the visually inclined, here is a little wiring diagram I made for our stage: 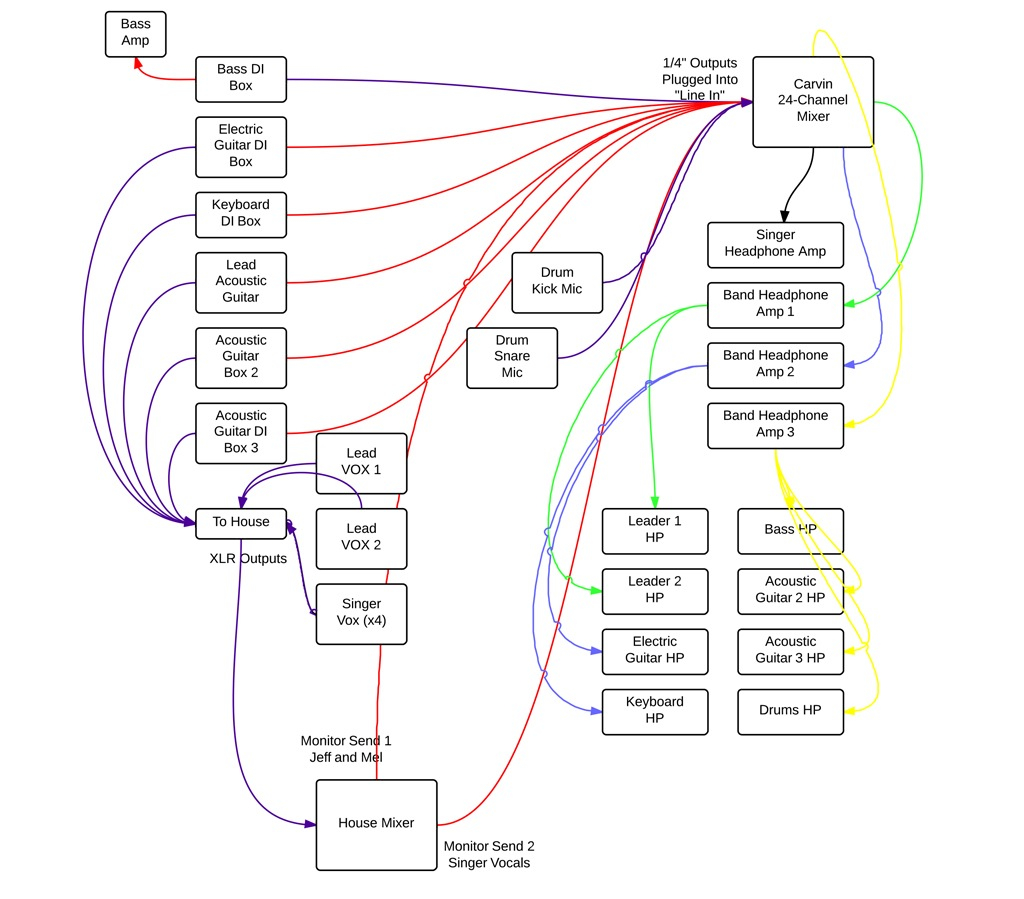 So for the XLR cables we got a few of these: 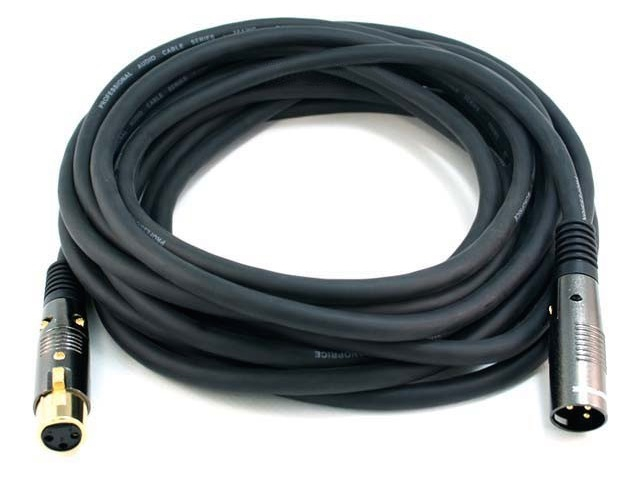 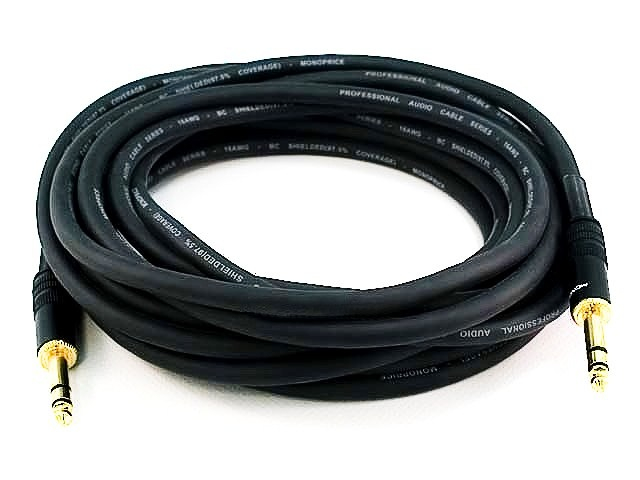 Then we picked up some DI boxes from Amazon, unfortunately I can’t find the exact model so here is a similar box, almost any DI will do, you just need to make sure it has both an XLR and 1/4” output: 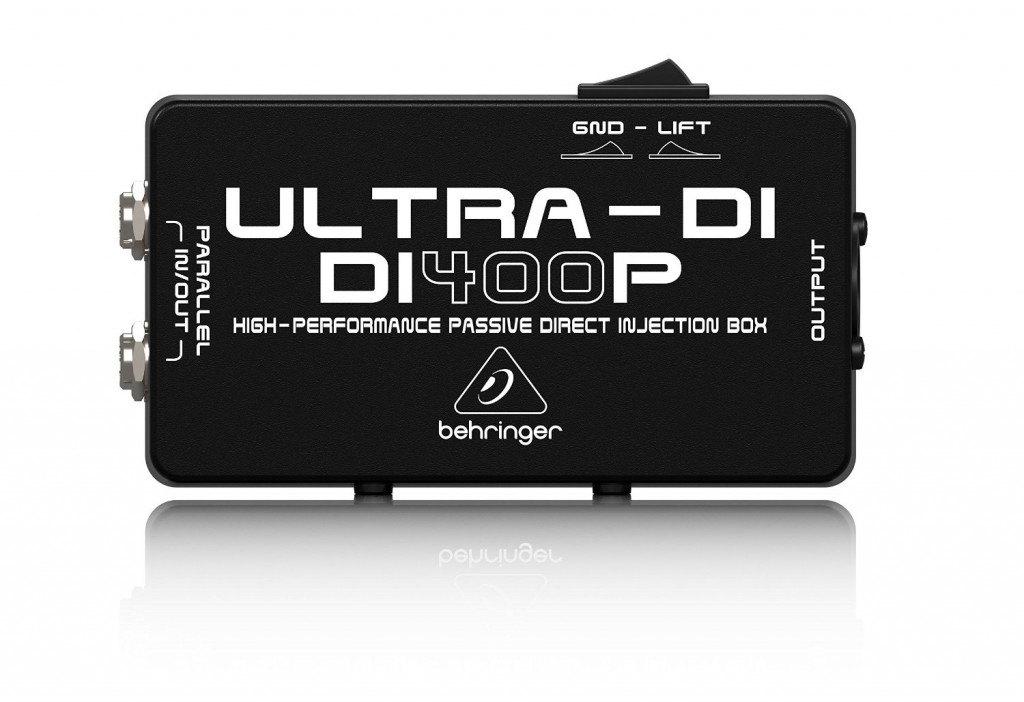 Then we picked up 4 of these from Amazon: 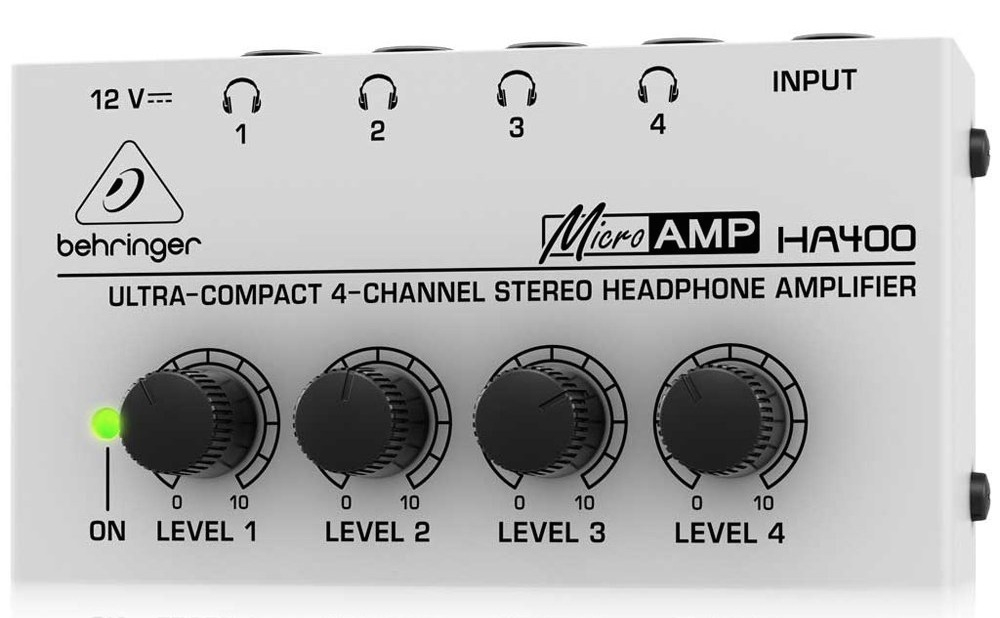 For the Headphone extenders we again turned to Monoprice and picked up a bunch of these: 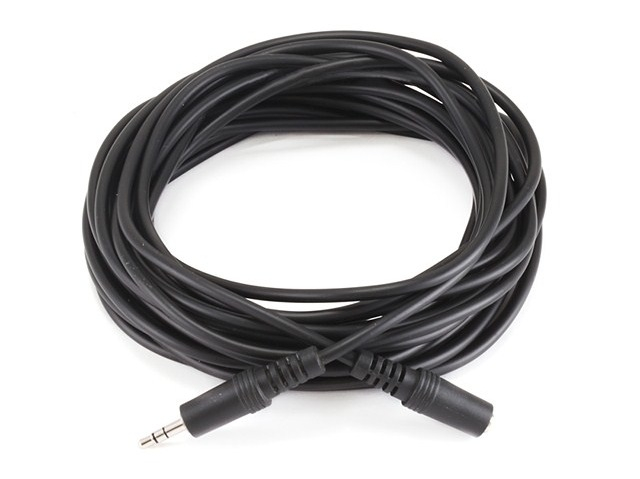 Most of you may have noticed that the Headphone Amp/Splitter has 1/4” outputs and these are 1/8” cables and that  we needed a slew of 1/4” to 1/8” adapters. You also probably know that getting those are not cheap, at most retail stores you end up paying way above what you think you should.

HERE COMES MONOPRICE TO SAVE THE DAY! 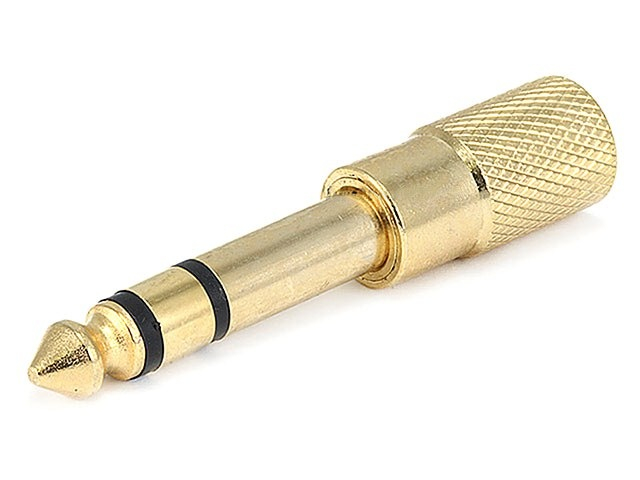 $.75, yes you read that right, for three quarters each you fully stock your media team with these often used and often lost adapters.

After doing all of the research and pricing we pulled the trigger on the purchase. I had a budget of $300 dollars and got all the gear we needed for $365.22. 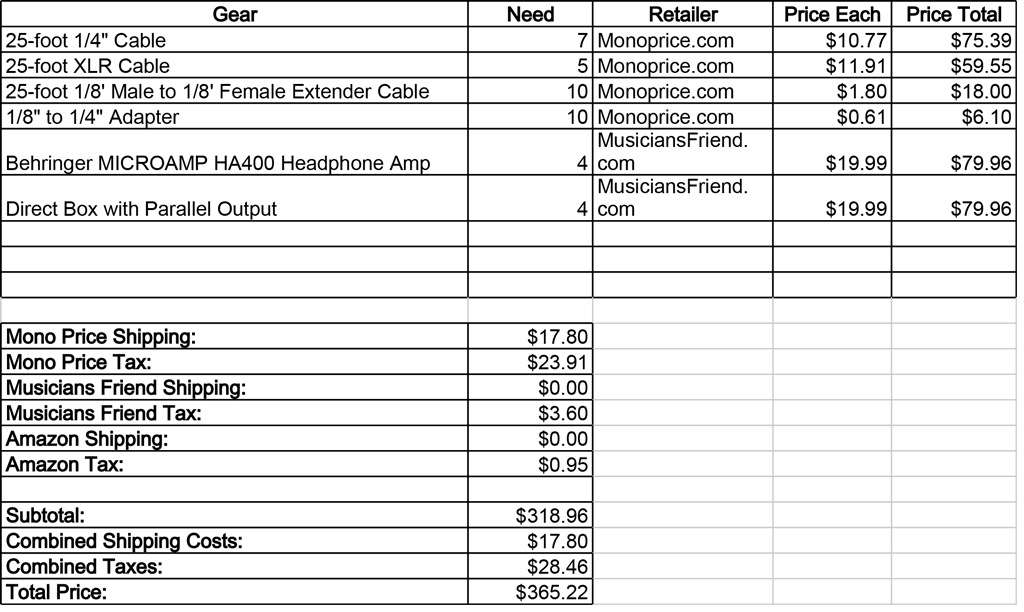 Headphones, I didn’t get approval to get these with the church’s funds so I picked them up on my own dime. I know that there has been a lot written on headphones, which to get, who to buy from. I’m not going to get into that, I will give my personal recommendation on the best pair of headphones I’ve used for In-Ear Monitors.

I’ve used some high end Sure IEM’s and was a little disattisfied because they would never actually stay in my ears. However I took a chance on a pair of cheap headphones that had a cool design and they turned out to be the best headphones I’ve EVER used.

For reals, plus the way that they go in your ear, the cord wraps around behind the ear, which makes it super easy to hide the cable behind your back.

Where did I get them? You guessed it, Monoprice. (I swear I’m not an employee, just a fan) 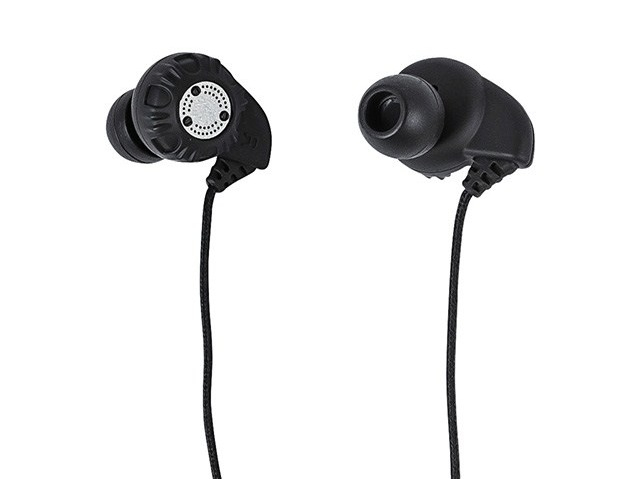 Over the course of two days I worked and rewired our whole stage, and then that sunday we lauched with the new set up. Immediately my worship leader came over to me and thanked me because for the first time in all the years he had been leading worship he had never been able to hear himself, and now he could.

I’m happy to report that that system served us well for about six months until the church was blessed with a significant gift and we upgraded the whole system to a digital mixer, with 10 individual channels, a computer to control the mix, with iPhone and iPad monitor control (Which if you remember were some of our “wishful thinking” goals).

We took down our massive projector screen and replaced it with 2 50-inch HD TV’s and started live-streaming our services.

God has been pulling us forward, that little act of obedience has blossomed into a media ministry that is moving forward. We aren’t as tight as we could be, but we’re a long way from where we were a year ago.

Check us out at: www.hopechristian.com

Do you have a story of how you creatively accomplished a media goal on a strict budget? Share it in the comments below!