Hello friends! We are in the process of installing some really cool digital signage at Nations Church Los Angeles and I wanted to share with you the setup and gear we used to get four screens up and running for under $300 (at least for us). This set-up will from here on be called the PiPlan.

When starting any project for a church it’s hightly important to consider the reason for it, especially if there is money being spent on it. This is something I’ve always tried to consider when proposing a project to my Pastor. Before I begin researching solutions, I ask myself, why do I think this is necessary? Is this truely solving a problem, or just upgrading something that is working perfectly now?

The goal of this project was to solve two real problems.

So, how does the PiPlan solve these two problems?

Problem 1: The Lack of a Clock

There is a clock mounted above the sound booth in the sanctuary, however we recently installed a spotlight up in the booth that makes seing the clock impossible. This is problematic because we run two services, and knowing how much time is left before we have to reset helps our pastor in leading the service.

Could we just buy a nice digital clock and mount it below the light? Yes, but to get one that was bright enough it would raise the cost above what we would be willing to spend. Also, we wouldn’t have control over the look and feel.

Want to incorporate our logo into the clock? Nope. Want to update it to match the sermon series? Not possible.

With the PiPlan we will have that ability.

At the moment, our set-up in the lobby is, 2 mounted TVs with DVD players plugged into them. This presents two major issues that the PiPlan seeks to rectify.

Step 2: Getting the Great Gear

So for this project we’ll need some equipment.

Since I don’t actually have a Windows computer, I can’t give a detailed explanation on how to load the card using that platform. HOWEVER! I did find an excellent tutorial on Sabayon.

For Mac users, the process is a little different and easier.

First we insert the microSD card into the included adapter and stick that bad boy into the computer. The microSD card ships with a pre-loaded operating system, which we don’t need, so first we are going to format the disk.

Now it’s time to load the operating system. After purchasing the Donation Version of Raspberry Digital Signage you will be emailed a download link. Download the file, and extract it from the .zip archive. I suggest leaving the .iso in the folder it extracts to. Once you have that, it’s time to load the OS onto the card.

Open Terminal, if you’re on Yosemite or above, you can simply hit Command + Space and type Terminal then hit enter.

Type this into the terminal window and hit enter.

This will list all the drives you have connected to your computer. It wil look like this: 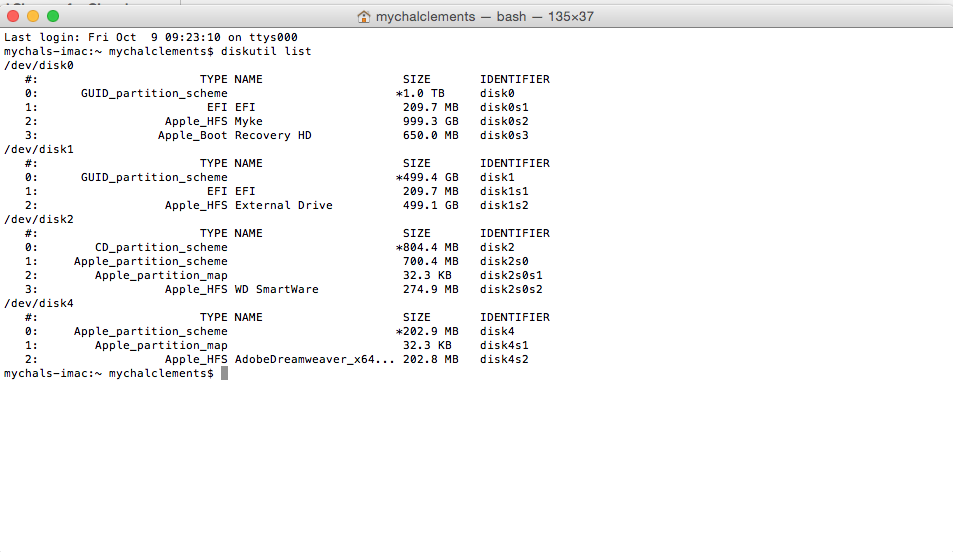 Figure out which disk is the microSD card. (Hint it will most likely be the last one on the list.) Once you know what disk it is then type:

Replace “disk3” with the actual number of your disk. It will give you a message saying that the disk has been unmounted sucessfully or something like that. Then type:

If you have left your .iso file in the folder it extracted to you can just copy and paste the text above and then change the disk number to the correct one. If you moved the .iso file, you will need to replace the section after if= with the actual location of the .iso file. Then, hit enter.

Go get some coffee, stretch your legs, eat a bagel. Whatever floats your boat, while you wait. You’ll get a success message telling you how much stuff was moved, and how fast it was, once it’s done. Then eject the card from your computer and move on to Step 4.

Step 4: The Gathering of the Pi’s!

Ok, so to start off with we’ll need to get the Pis assembled!

First take everything out of the bag and take a super sweet photo for instagram. 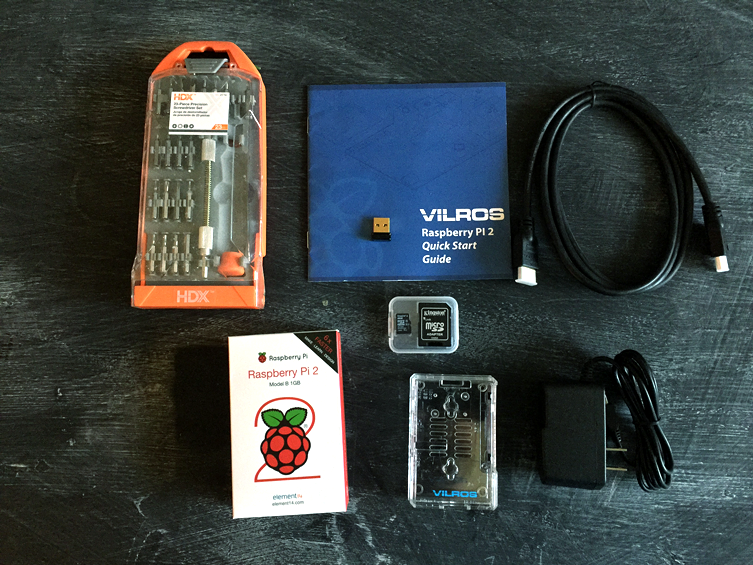 CHECK! Now lets assemble this thing! This is the PI. 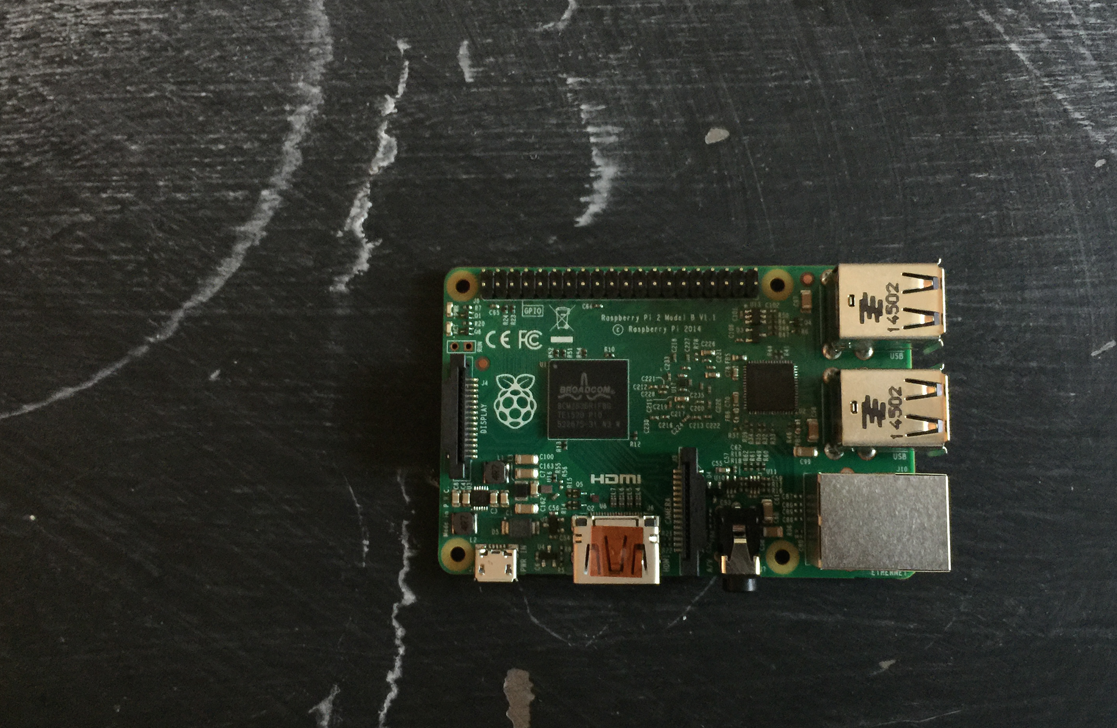 Insert it into the bottom part of the case, it will be apparent which way it should go because the slots will line up. 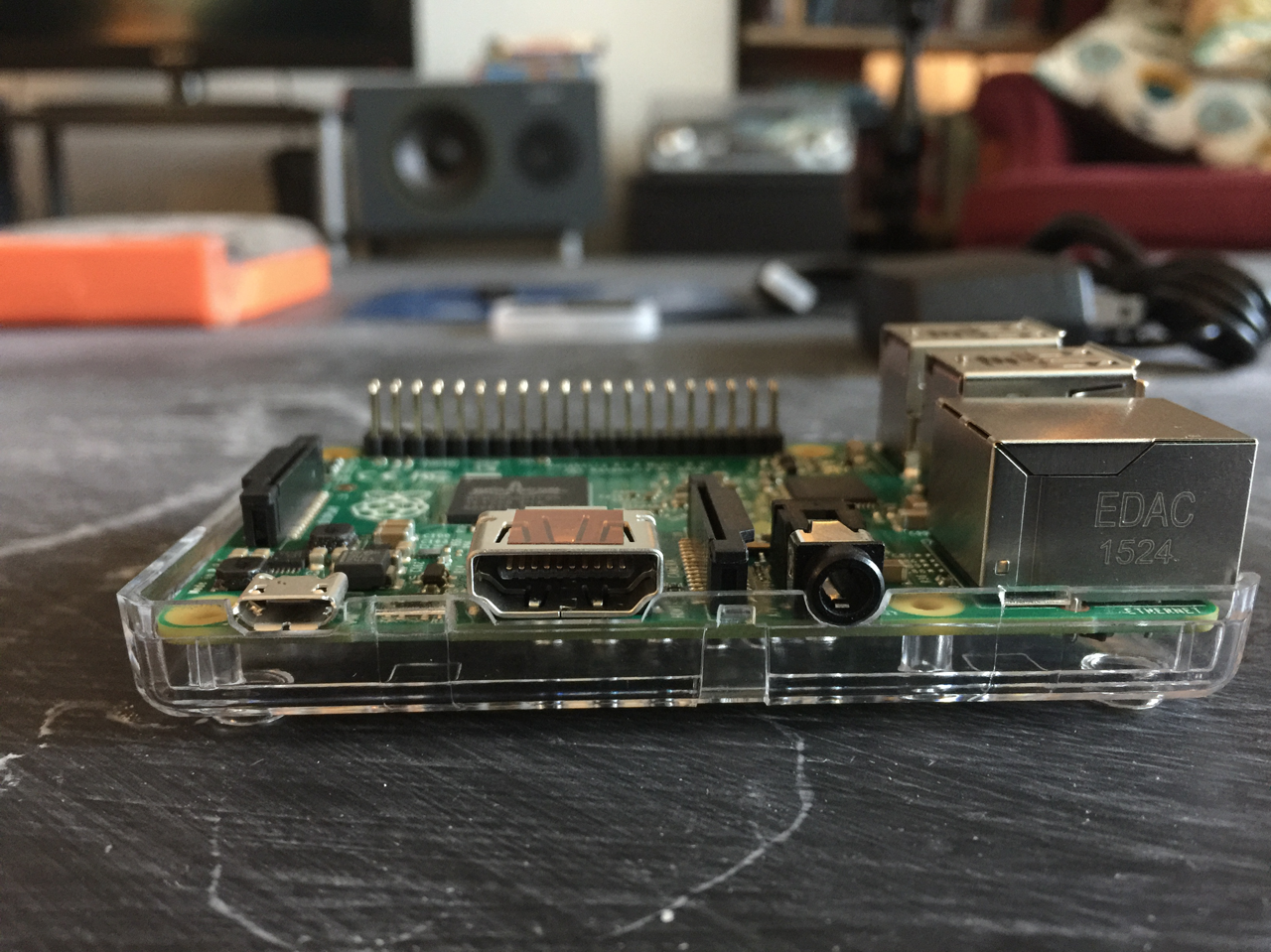 Next before you put the top on, you will want to install the heat sinks. I’m a dummy and didn’t take pictures of this part, but here is what the heatsinks look like.

Installation is really simple, just peel off the paper backing and then stick them on the two black squares pointed out below. 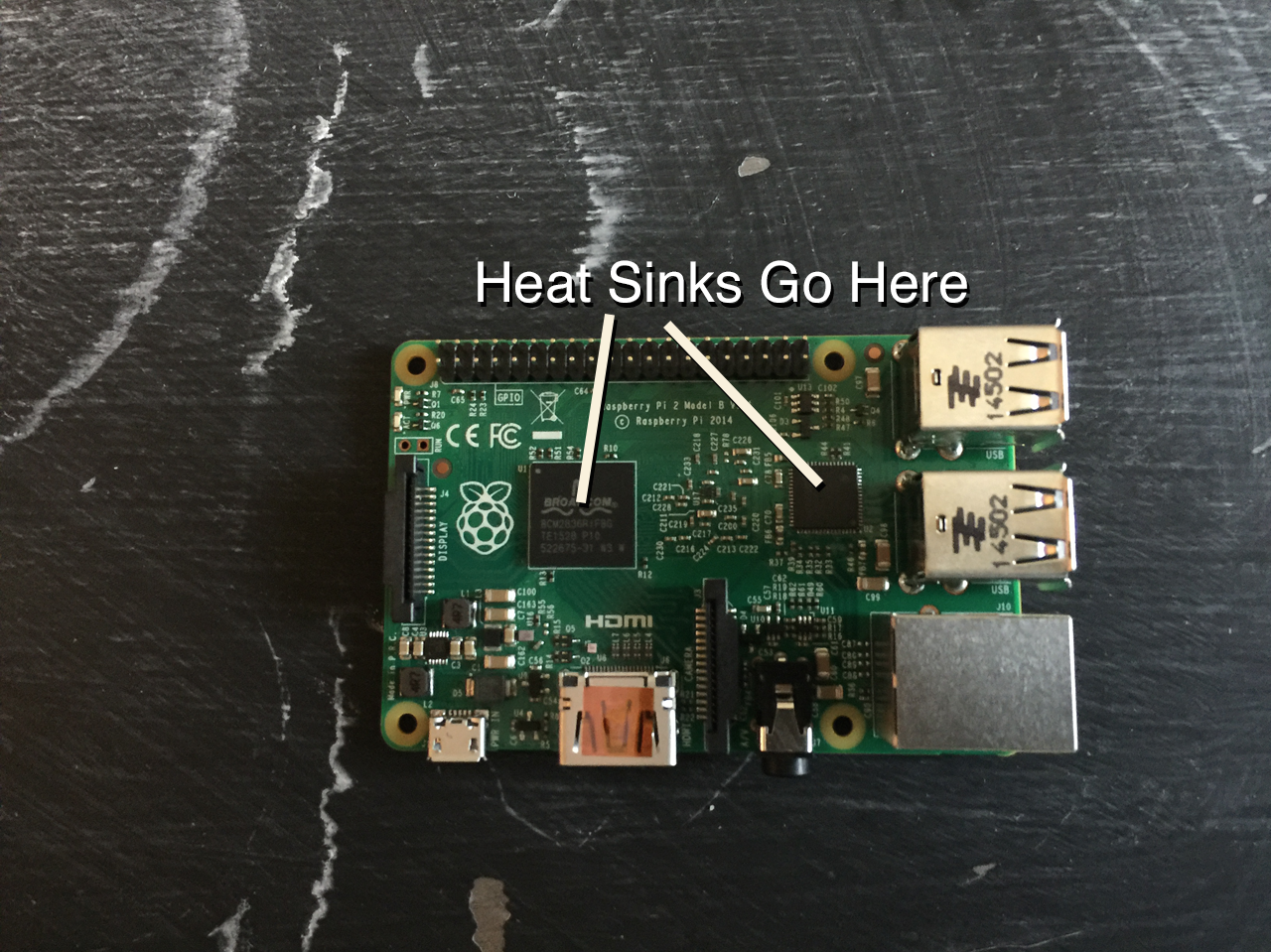 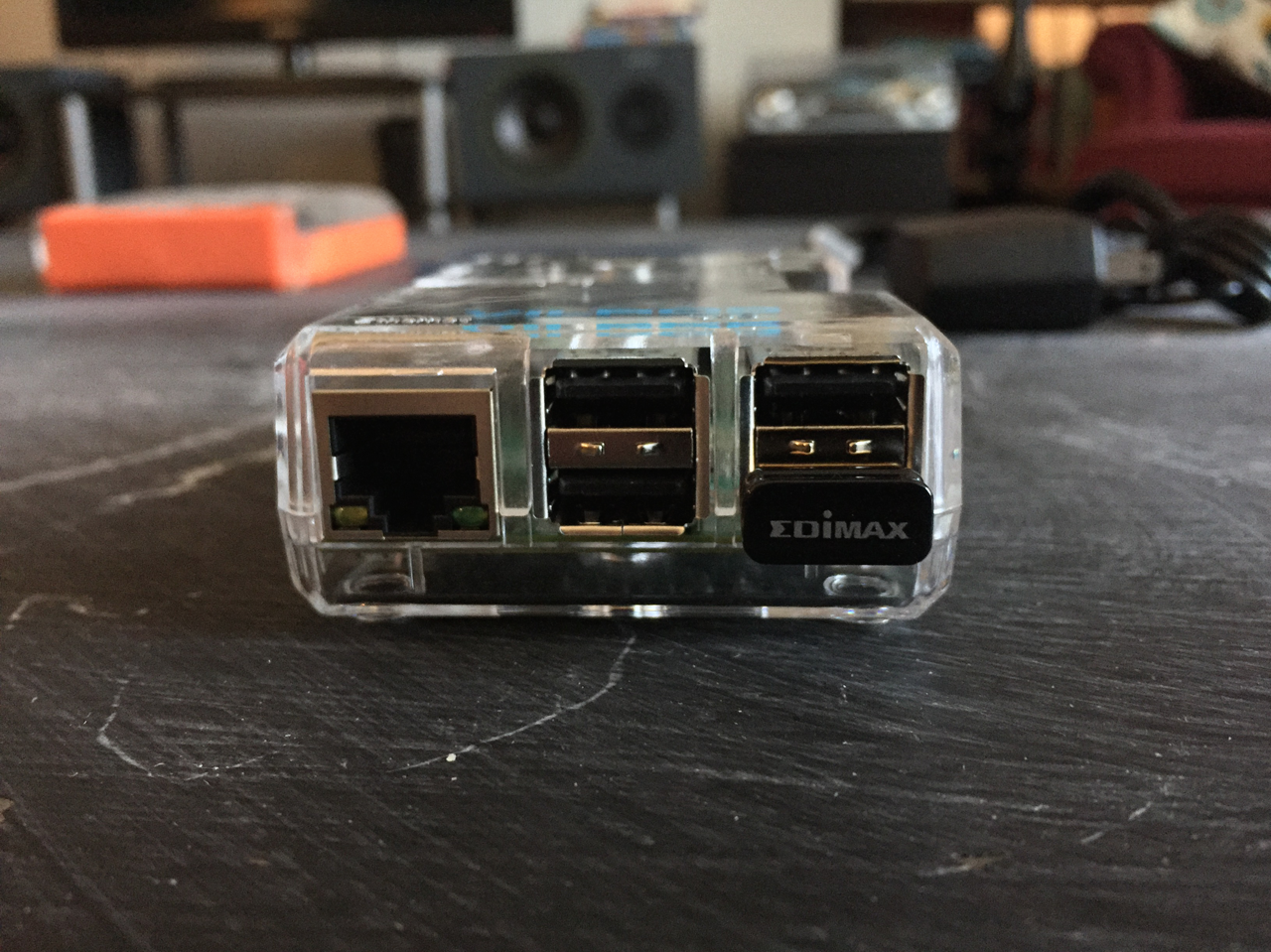 After you have formatted the microSD card from Part 3, insert it into the slot on the bottom of the Pi. 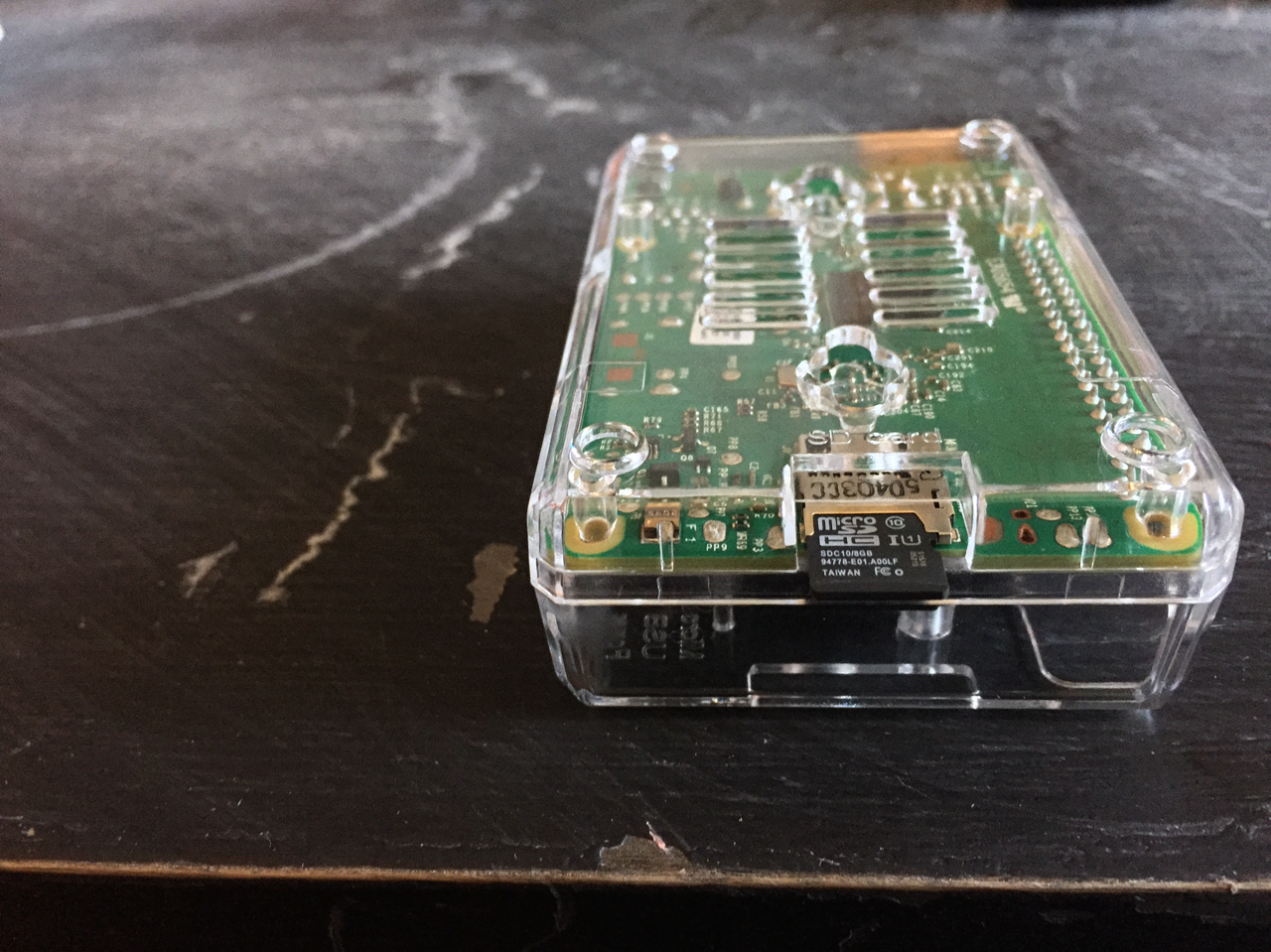 Next plug the HDMI cable into your screen and the Raspberry Pi. After you have done that, connect your mouse and keyboard to the remaining USB ports. Then go ahead and plug in the Pi to boot it up.

Step 5: Connect it to the Internet

Alrighty, we have the OS Installed, the Pi assembled, now it’s time to configure it and make it work. When you first plug in the Pi, it will show a black screen and a ton of text will appear as it boots up. Then you will get this screen.

Once the Pi connects to the internet, it will show some red text giving some network diagnostics, I suggest taking a picture of this page as it will display your IP address, which we will need later. If you miss it, you can always reboot by unplugging the unit and waiting until this screen pops up in the boot sequence: 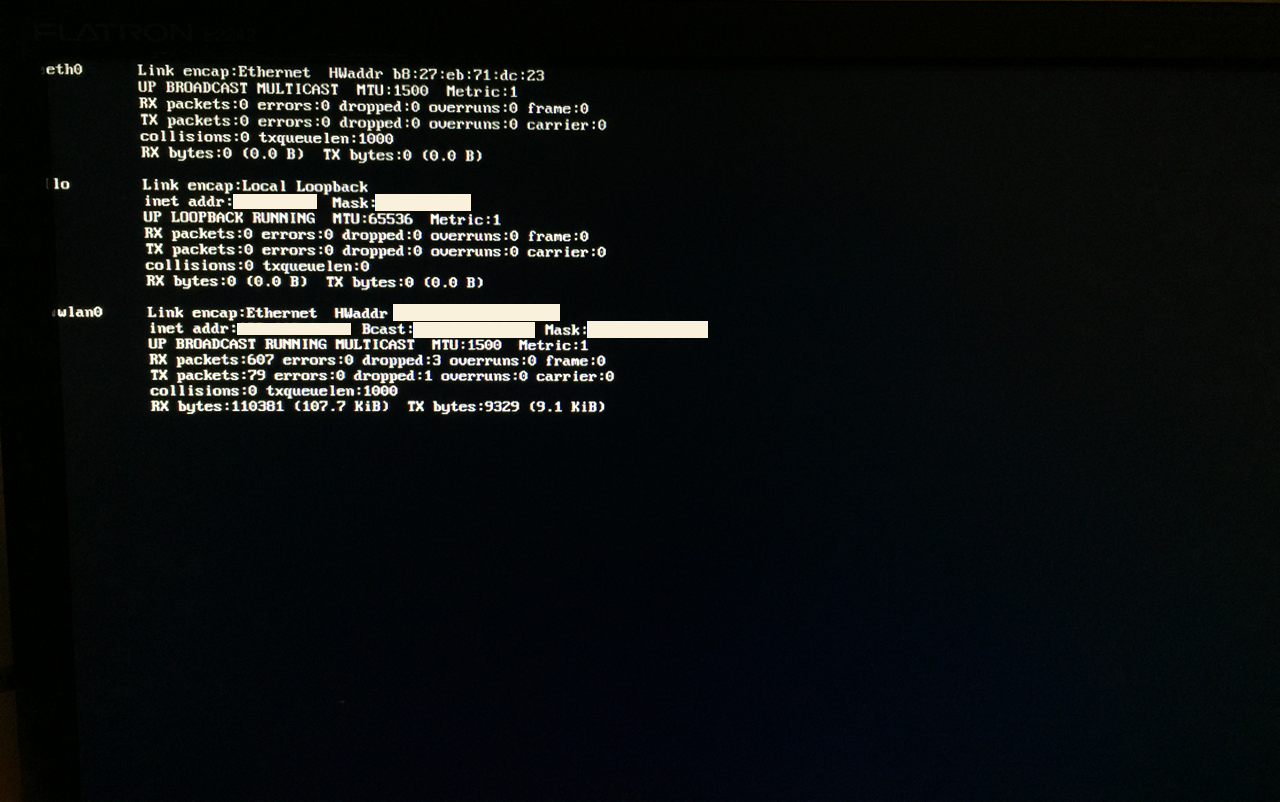 That will have the IP address of the Pi.

Once the Pi Boots up the first time, click on the “Click Here to Modify Settings” button. There you have your settings panel with all sorts of sweet options. 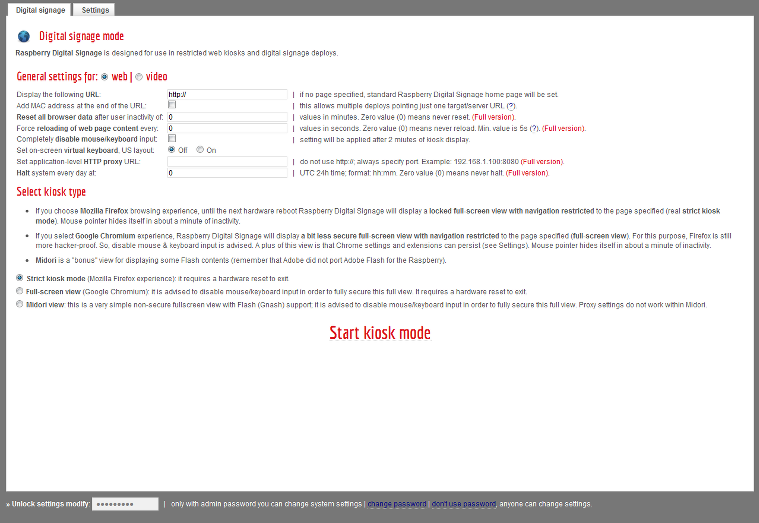 Type in the URL you want the Pi to load when it boots up. as far as the kiosk type, I suggest choosing the middle one “Full screen view.” However, we’ll cover that more in-depth in step 7. First we have to make a few adjustments to the OS of the Pi before we’re good to go.

Alright, leave the Pi, up and running and connected to the internet. Move over to your computer. Open your SSH client, for Windows use Putty, on a Mac, Terminal works perfectly.

Then hit enter, it will ask you for your password. The default password is live. Then type:

Hit enter, then type live as the password and hit enter again. You now have administrative rights. Next, we need to update the components of the underlying Operating System on the Pi, we do this by running these commands one after the other.

Note: It may take a while to run both of these commands.

Once both of those have run, we need to reset the timezone so the clock works correctly. Run this command:

Follow the on screen prompts to set the timezone to wherever you are, using the arrow keys and enter to navigate.

Next we need to install a cool little tool called raspi-config that will enable us to overclock the Pi to get more performance, this is why we installed the heatsinks back in step 4.

In terminal run this command:

Wait till it finishes, you’ll need to confirm you want to install the program then run:

This will open a new screen. First we are going to choose Expand Filesystem

Follow the instructions and wait for it to finish. Then arrow down to Overclock we’re going to choose the preset Medium. 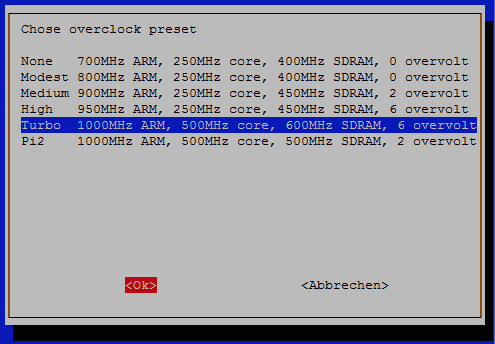 Scroll to OK then follow all the steps raspi-config has you confirm. Then, exit raspi-config. It will ask you if you want to reboot now, choose yes.

Eat some pizza rolls while you wait patiently for the Pi to reboot, when it does the response time should be a lot quicker.

Once the Pi gets booted up. Click on the link that says change settings.

In the section that says Select kiosk type we want to choose Full-Screen view. You can also set the “Display the following URL” to whatever you want, like you chruch’s website

Then click Start kiosk mode, for some reason this is the only way to make sure those settings stick when you reboot the Pi.

For the clock, I simply followed this tutorial and applied some of my own CSS and HTML skills to customize if for what we needed. If you want you can download a pre-packaged template you are free to modify at this link. One thing to note is that you will want to put everything you intend to have on the screen inside of a div that has the css width property set to 100%, or else you’ll get some nasty scroll bars.

Here is how it ended up looking on my TV 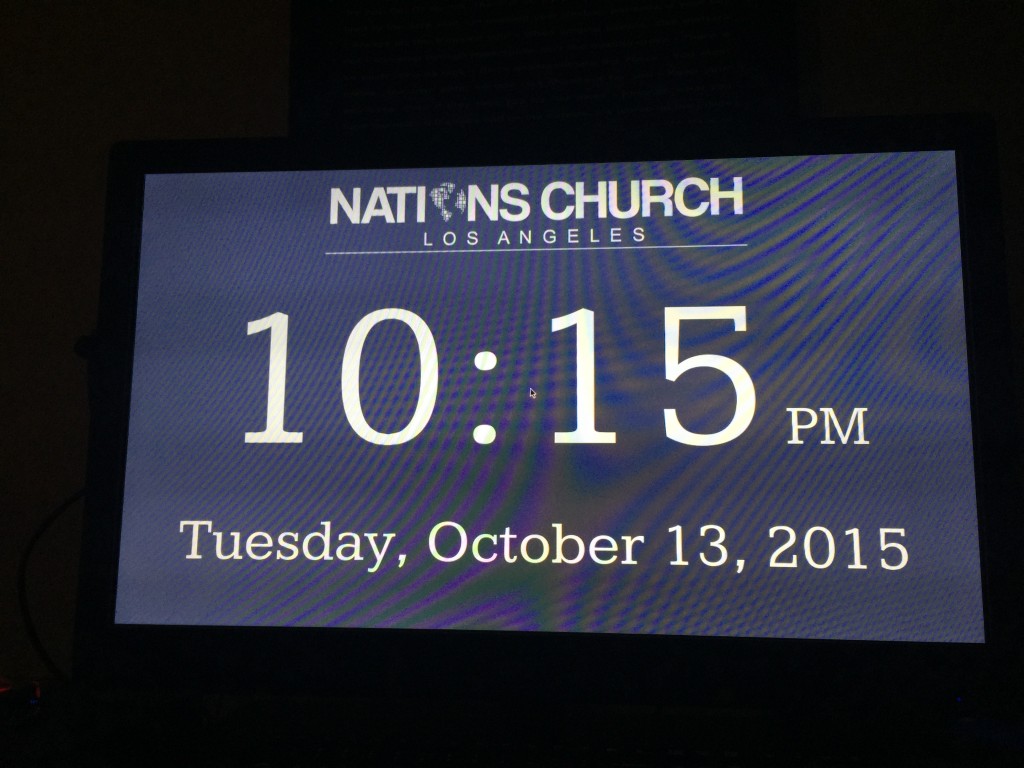 I’ll be back next week to talk about the WordPress Digital Signage theme once I get it up and running and get everything figured out for us. In the meantime, download it for yourself and play around with it!

Let me know if this tutorial was helpful down in the comments!